June 10 Brazil: Slap in the face and a few snipets from old newsletters

I was preparing for my trip to northern Brazil last night
and getting ready to go to bed when twitter came to life
with the last vote from the Brazil Supreme Court.

I was thinking it was going to be a calm weekend without
much going on. And then Boom !!!!

For anyone with an education and who keeps an eye
on the political scene in Brazil, last nights 4 to 3 vote
to not proceed to anul the 2014 election because of campaign
funding irregularities was a left hook to common sense.

Even with audio proof two weeks ago that President Temer
was in the know of shady money transfers was not enough
to persuade FOUR Supreme Court justices to not move the
case forward to anul the Dilma/Temer ticket.

I am not totally surprised that this is the end result, but I am
surpised at how "in your face" this decision demoralizes all the
other Federal Judges works to date on Lava Jato or Operation
Car Wash.

Two weeks ago, the Court was handed audio proof and this was
on top of stacks on testimony from Odebrecht and their kickback
business model that had been going on for 50 years in Brazil.
It damn near involved everyone. Excel spreadsheets with nicknames
of kickback recipients, dates and amounts.

I can only surmise that at the end of the day, the four Justices
decided the lesser of two evils was to kill this now instead
of let the country go through another 15 months of political hell.

Appeal process, impeachment trial, votes, protests, and then a new election
just to have another election.

If one does not assume this, then the only other scenario one can
conclude is that some sort of politcal pressure was applied to the Court.
This takes us down the conspiracy rabbit hole and will drive
you nuts. Many in Brazil believe this to be the case.

I would have liked to see Temer serve out his term not because
of any leadership on his part, but moreso because of stability.
Blario Maggi is Secretary of AG and I would like to see him
remain in that position until January 2019.

However, I was hoping they would have come up with a way for
Temer to remain, or step down, but discipline the party somehow
as to not encourage this behavior. Without some sort of discipline
at this point, all they are doing is encouraging this modus operandi
to continue and very few will go to jail for very long. Many will serve
a bit of time and then be under house arrest for a while.  whoppie ding...

The public is really pissed off. It was a slap in the face.
I expect protests to erupt Sunday and again on Thursday
June 15th, which is a national holiday.

What will happen to Dollar:Real?

I can make a case for higher and lower dollar on Monday.

If higher, Central Bank will step in and sell more dollar swaps.
If lower, market will assume pension reforms will pass and some
sort of economic discipline will occur over next year with slight
GDP growth. As I said above, the lesser of two evils.....

The focus will now turn to the Oct 2018 elections.
There are many candidates.
However, lately, former President Lula has risen to popularity
again. Assuming he stays out of jail, he will be a contender.

This goes against all common sense, as per the party that helped incentivize
all the kickbacks could actually come back to power because of the suffering
of the common man. They can point to the corrupt system and say " see, the rich
always get their way, let us help you." "It will be the only way for you poor folk
to survive."  Vote for me.

So- the end justifies the means? Brazil got her Olympics and World Cup
venues. Those in the club got their payoffs. A few politicos got a feather
in their hat, but the working man now pays for all of this all the while
the education and medical system in the country deteriorates?

Strange, strange times we live in.

I will include a two screen shots from earlier newsletters in 2017.
I believe they speak for themselves.

Screen shots from April and May technical updates below: 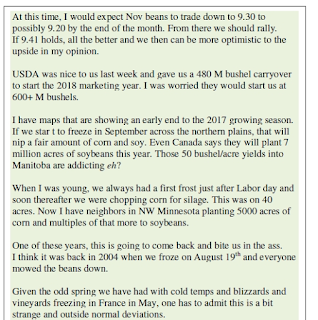