I see the previous blog post was very popular.
circa 2000 views

I was in MT last week. Not much more to say than what I put in
Nov part II newsletter. The crop is big. Lack of corn seed for
2nd crop is an issue going into 2017. Expect record area of planted
corn.

Dollar has rebounded back to 3.47. Soybeans continue to rally.
Life is good.

I will be in southern Goias this next week.

In have received photos out of Rio Verde, Goias. Ditto.
Soybeans are the darkest green ever.

Fertilizer shipments until October are 8% over last years pace.
This all bodes well for productivity.

Corn ethanol mill constuction in Lucas do Rio Verde is making
fantastic progress. Looks to be up and running by June 2017.

I will include some photos I took from airplane near Sorriso, MT.
I think the photos tell the story. 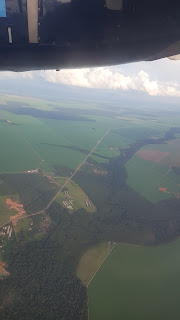 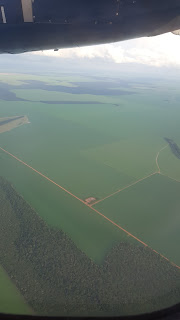 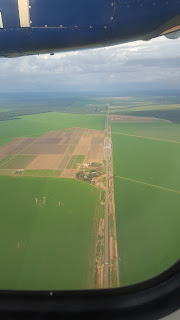 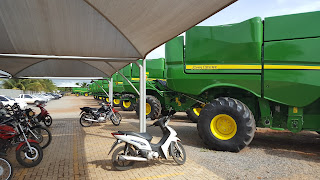 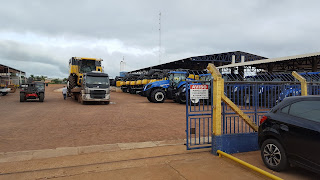 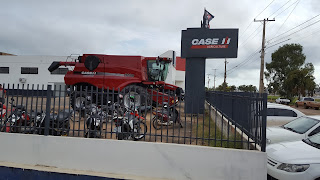 Nov 11 The week the world changed

As recently as last week I was reading economic reports from
various banks and they were lowering their dollar:real forecast for
2017. They were thinking 3.15 was the new norm. We are long the Real
they said. From experience, these longer term FX forecasts never work
out as planned in Brazil.

On Tuesday, the dollar was 3.17. Everyone knew Hillary was going to
be the next President.

In two days, the dollar touched 3.50 and settled the week 3.40:1.
I had just written a couple quarterly reports for Brazil investors and
I forecasted that I thought the REAL would drop back closer to
3.50 for the 2017 season. This was based on rising interest rates
in USA and declining rates in Brazil. I never dreamt the forecast
would come true in a few days.

Trump shook the developing world to its knees. Wednesday it seemed
like everyone was in shock. It took until Thursday for the globe to
figure out what does this all mean?

Major global banks were caught on wrong side of FX trades. Position
liquidation fueled the moves.

In addition the the northern hemisphere drama, Brazil was creating a new
one for herself. Someone found a bribe check for R$ 1 million
made out to President Temer for a project. Maybe, he will be impeached?

All of this came at a perfect time for the Brazil farmer. We have 10 dollar
soy in Chi-town and a weaking FX. All this after they bought inputs at
3.20:1 is what doctor ordered going into a whopper bean harvest.

It sounds like Trump is serious about bringing home circa 2 trillion
dollars trapped in other countries. I think smaller developing countries
sense a massive sucking sound of dollars leaving their banking systems
in 2017. Cayman Islands, Mexico, Hong Kong, Ireland to name a few.

If and when all these dollars come home, they will be looking for a new home.
I think the next two to three years will be inflationary beyond our wildest dreams.
I think all of those things that Jim Rogers was touting back in 2008/2009 during
the crisis and stimulus packages are now going to come true.

Inflation is the best drug man ever created. The artifical sense of wealth
and prosperity. More than likely debt driven, it will lead us to even a greater
bubble.

These dollars are finding their way into commodities again. Even if some
commodities are not bullish per se, they are receiving the liquidity and
giving us wild moves when there seems to be no fundamentals to justify it.

China has been sniffing this out for months. China does not want to deal
with a USA that is bi-polar. They cannot risk a trade war and free
flow of food.

China has been buying Brazil and Argentina. This is the biggest fundamental
change in global agriculture taking place right now.

They are buying ports. They are buying soy and corn warehouses. They
are buying majority stakes in grain trading companies in Mato Grosso.
They are buying sugarcane mills in Sao Paulo state. This past week
Brazil and China formed a R$ 1 billion Real infrastucture developement
fund to help get projects off the ground in Brazil. Railroad concessions are
first and foremost on their list for 2017.

China is hedging her food sourcing options away from an unstable USA
environment in the future. I am not predicting a trade war or embargo
type scenario, but China is making damn sure she is not caught with her
panties off in case someone gets cute.

This is super bullish for South America in the coming years. I hope Brazil can
keep herself on the recovery path and not fall off the bar stool again.
Temer and company have a long way to go and a short time to get there.

I will be in Mato Grosso the next week or so. I am hearing that early soybeans
could be ready by December 15th.

If the Amazon rains do not hit during peak soy harvest in late Janaury and
early February, Mato Grosso could have 5 million hectares of soybeans harvested
of her 9.2 million hectares by Feb 15th. This is like a really big deal dude.
This eludes to a massive 2nd crop planted area during the ideal window.
Keep an eye on this.

Looking at politics: During Obama´s first two years, he placed all his chips
on Obamacare. In hindsight, he maybe should have done things differently.

Trump has two years. Let us give him a chance. I realize the vote was more of
a FU to Washington DC. They needed it.
The worry I have coming from an ag background that has needed so many subsidies
in the 80´s and 90´s to survive via govt payments, crop insurance, CRP, disaster
payments, and emergency ag loans, that I fear that sometime in the future when we
least expect it and we need help the most, we will get the same vote back to us in rural
America. FU2 will be the response to our plea for help.

I think we need to be ready for that sometime in the future.

The game has changed. The rules have changed.