Brazil B-7 by Sept

To help Petrobras, the government will increase to 7% blend of biodiesel for diesel
Measure can reduce by R$ 1 billion of state imports

Harvest in Paraná: government wants to increase biodiesel production to alleviate the deficit in petroleum account

BRASILIA - President Dilma Rousseff will sign next week an interim measure to increase from 5% to 6%, the mixture of biodiesel to diesel fuel sold at pumps, starting in July.

The prosecutor will also provide for the increase in the percentage to 7% in September.

The main objective of the measure is to encourage the production of renewable product in the country, helping Petrobras to reduce imports of fossil diesel and deficit called "petroleum account".
Estimates of shared government-industry indicate that the increase of the mixture of 5% to 7% decrease by 1.2 billion liters per year of diesel imports of the country, an annual savings of R$ 1 billion to Petrobras account. The average monthly imports of diesel last year was 827 million liters, but in January this year the volume imported was a record and reached 1.25 billion liters. The government has insured the price of fuel, to avoid impact on inflation. And Petrobras, in its May report, indicated a loss of 30% of its net profit.

Unpublished survey by the Ministry of Mines and Energy shows that the production and effective use of renewable fuels in Brazil - biodiesel, ethanol and anhydrous ethanol - have stagnated since 2010.

During this period, the demand for fuel jumped 14%, but as there is no domestic production. Enough to meet it, Petrobras had to import gasoline and diesel to supply the market.

The measure also weighs in favor of the environmental aspect, since it will promote the use of clean and renewable fuel to replace fossil. Each percentage point increase in biodiesel blend of diesel is equivalent to planting nearly 7.2 million trees, reveals report "Environmental benefits of production and use of biodiesel," the Ministry of Agriculture, October 2013.

The main raw materials used for the manufacture of biodiesel in Brazil is soybean oil (almost 70% of the total); beef tallow; cottonseed oil; used frying oil; lard; and chicken oil.

The decision to extend participation in the oil biodiesel sold for vehicles has technical support in the government for some time, from the international experience. Trucks that circulate in other countries with similar engines have taken good advantage in terms of power and emissions to 7% blend, known as B7.

The adoption of the larger percentage as the national standard was hampered, however, the perception that most biodiesel in the blend become the most expensive oil in the distribution, pushing inflation. However, at this juncture, the imported diesel is already about 20% more expensive than the biodiesel produced in Brazil.

A recent study by the Getulio Vargas Foundation (FGV) served to remove the resistors from the Ministry of Finance to measure, because it showed that the increase in productivity of agribusiness and idleness of plants for biodiesel production - currently at 61% of its potential - make changing the mix almost neutral in relation to the impact on the IPCA.

Despite the announcement occur almost on the eve of the opening of the 37th biodiesel auction, scheduled for June, the National Petroleum Agency (ANP) is already prepared to make the necessary changes and adopt the mixture of 6%.

- We have practically certain that (the signature) will occur next week, because in June the auction must be conducted so that biodiesel can begin shipping in July. The edict was issued by the ANP with a mixture of 5%. The MP must be published so that the notice is changed - said the president of the Brazilian Biodiesel Union and Biokerosene (Ubrabio), said Odacir Klein.

The mandatory blending of biodiesel to 6% and 7% will increase ten years after the launch of the National Program for Production and Use of Biodiesel (NPPB), when fuel was introduced in the Brazilian energy matrix, with a focus on social inclusion and regional development . While starting to be produced in December 2004, the biodiesel blend only became mandatory from 2008 throughout the country, with 2%. Then it was expanded to 5% in January 2010, anticipating in three years the goal established by Law No. 11.097, of January 13, 2005.

During this period, the government had to adopt a series of adjustments to prevent clogging in engines with higher fuel oxygenation by increasing the proportion of biodiesel. Since then, the specification has changed and there was more careful while handling the product, which, in the evaluation of government agents, ensuring a gradual migration from 5% to 7% with no major mishaps.
- The government is taking this responsibility - said a source familiar with the measures.
The sector, according to Klein, is capable of a mixture of up to 10%, but he points out that "you can not demand that the government increase by 100%" (compared to 5% today). And remember that two years ago had been claiming increasing content of the mixture. Government agrees to discuss further increase, but with technical studies to prove the efficiency.

Picture seems to be more clear by the day. 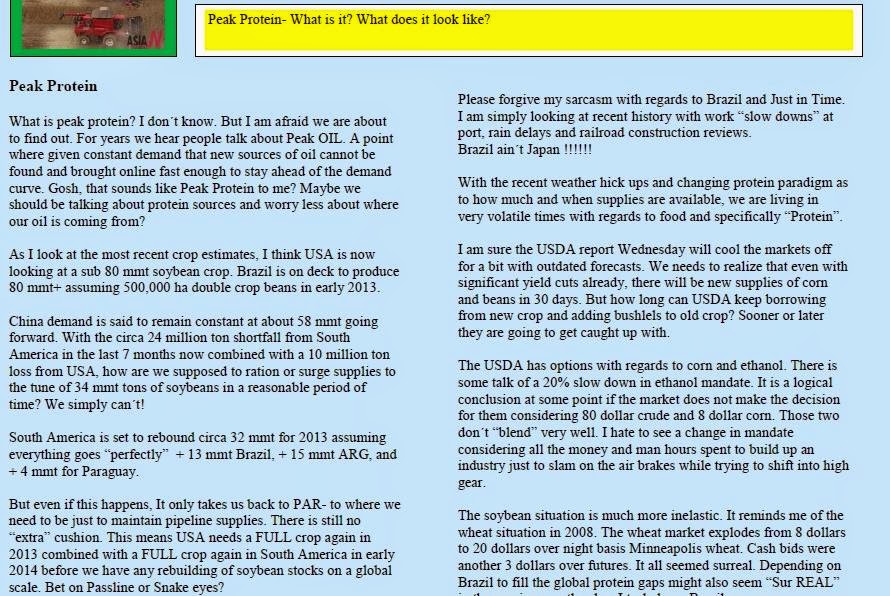 Posted by Kory Melby at 6:22 AM No comments: 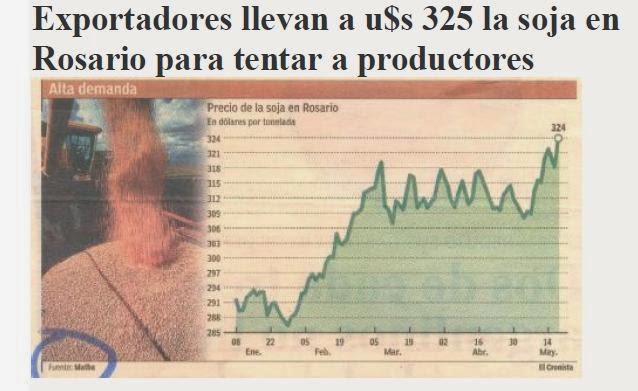 Posted by Kory Melby at 5:37 AM No comments:

Well, we can sure feel the election promises today.

Gov´t announced mega funding for continued low interest loans
to buy tractors via Moderftota program.  4.5% money with
8 payments and 2 years to skip a payment too.

Various farmers associations are rallying to not support Dilma for
re-election.

This week President Dilma will be inaugurating the North/South
railroad from Palmas to Anapolis, Goias. 27 years after it was
first announced.

Gov´t officals are in China this week looking for money to
fund the new railroad projects that were announced 4 years ago !!!!!!!!

It rained here in Goiania today. Very rare but welcomed.

Protesters are organizing for June.

It has been a tough transition for my buddy that used to sell fertilizer for Bunge.

Since the Yara merger, there have been many changes.

Supervisor and personel changes that have not been beneficial.

His old supervisor was put in charge of fertilizer sales to Sugarcane mills.
Thus, taking all his old clients.

Yara sends in a new young hot shot with an attitude problem to be his new boss.
The young buck calls his old soybean clients and sells fertilizer direct to them at
a price R$ 90/ton less than my buddy even knew was possible.

Problem: Young buck sells fertilizer on the cheap and forgets to tell the
client that the fertilizer must be taken now. The client assumes he could take
delivery in August like he always has. Tempers begin to flare-
A new soap opera starts.

Yara has taken a large percentage of regional fertilizer market this season.

Kory, there is something funny in the air in Brazil this time. It has me worried.
You have not experienced this in the 10 years you have been here.

The stealing continues on government projects. The World Cup is a mess.
God forbid Brazil does not win the World Cup. The population will burn
the country to the ground. It is good you will be in USA he says.

Combine all of this with what we know. Inflation, high interest rates,
increasing the minimum stipen for the family purse(welfare), election,
Petrobras economics that make no sense, and a middle class that continues
to pay more taxes and sees little in return. The health system is on verge
of collapse and yet all people worry about is how to buy a ticket for the
final match of World Cup valued at R$15,000- R$ 20,000/ seat.
In some cases higher.

For the first time in a long time, this all has me worried. It is different
this time he says. It smells different.

Kory
Posted by Kory Melby at 7:15 AM No comments:

Thursday´s Conab report was as expected.

The soy production numbers continue to increase after the
sharp drop in March. They went too far too fast.
Subscribers were forewarned of this months ago.

On Wednesday this week our Ag minister has been quoted
saying that Brazil crop is 89-90 mmt.

We have yet to see reliable numbers as to how much
2nd crop soy has been planted.

I think 1.5 to 2 mmt tons of "Bonus soy" or "Mario Bros power up"
bonus soy will be harvested in June. This will add a few gold coins to the hopper.

This will take the Brazil crop to about 88 mmt for a final tally.

The dry season has kicked in on time and this will hurt the late
planted corn in Mato Grosso. Lighter soils will burn up before
complete ear fill.

Thank you for all the loyal subscribers. Many have renewed this
week after being with me since the beginning. The newsletter is
going on 8 years old now after very humble beginnings.

I am headed to USA at the end of May.

Mickey, Nasa, Mall of America and Minnesota lake country
are on deck.

I will keep tabs on things the best I can.

Personal comment: With the massive surge is Brazilian soybean area
the past three seasons, I am looking for a plateau at this level for a bit.
The soy economics do not justify the rampant expansion of area going forward
as we have seen in the recent past.

I have been saying for weeks that I thought the earlier estimates of 84-85 mmt
by some were too low.

We are still looking for more data as per how many hectares of 2nd crop soybeans
have been planted. The ranges are from 200,000 ha to 745,000 ha.
My opinion is more to the latter.

I think next week Conab will increase their estimate of soy crop also.
They went too far too fast back in March.

I think back to short crop years in the USA. The markets lost their minds
when we heard of 1 or 2 boats were on their way to Wilmington, DE from
South America. Boom soybeans down 30 cents.

Now we have a situation of just in time soybeans headed north. We are now looking at 20+ boats of soybeans and meal. Rumors of 30+ boats by the end of the day(i.e. summer 2014).

75 to 90 million bushels of imports of soy equivalents from Canada, Brazil and Argentina are
now possible and likely. Say that three times and click your heals together Dorothy, this
ain´t Kansas anymore!!!!!

What used to be the bare bones minimum for USA soy supply carryover is now coming
from the Southern Hemisphere!!!

This is a paradigm shift. Chicago and cash bids now need to adjust themselves to incentivize
imports from SA via direct bookings or China cancellations.

We are also doing this with ethanol.

We read about the Chinese being expert traders. I sometimes wonder as we look at how the
last 6 months has played out. China bought every last soybean they could from USA. At the same
time double booking Brazilian soybeans. Brazil ports performed perfectly this year and we end up drowning
the super duper Chinese ports and crushers. Sure looks like a case where the right hand does not know what the left hand is doing.

The end result is soybeans being shipped backwards up the Mississippi to get to the crushers
for just in time crushing. Crazy as a jelly bean policy.

In closing we need to give credit where credit is due. The Bunge/Maggi JV that built a dry port
in Para state and between trucks and barges got soybeans to the mouth of the Amazon to load
a Panamax this week. Well done.

More roads and railroads will mean easier logistics to China, Europe, and USA on the years
with sub par soy production. Emergency soybeans to the rescue. They will be a hop, skip and a jump away.

Twenty years ago with NAFTA etc, grain going across country borders was considered a sin by many.

Today, it is normal operating procedure.