4 railroads would be the ideal: 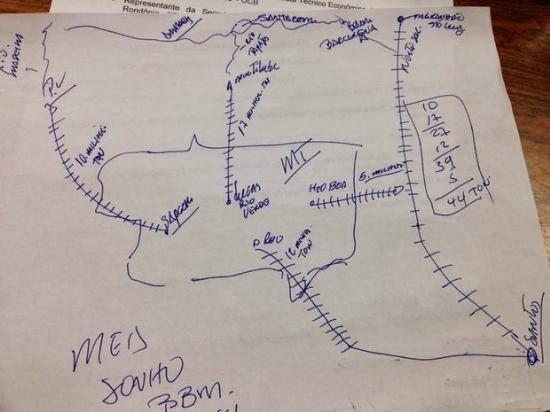 Bunge, Cargill, Dreyfus, Maggi, responsible for 70% of grain exports in the country, form company to dispute the auctions of railways and to propose changes in government railways that will be offered as federal grant
March 23, 2014

Four agribusiness giants - Bunge, Cargill and Dreyfus Maggi - and structuring business Presences of Light Station (EDLP) intend to join to create a logistics company to participate in the auctions railroad concession. Together, they account for 70% of grain exports from the country

These companies are willing to build and operate new lines in Mato Grosso. The main target of the company, however, is to act as an independent carrier for rail freight. It is a figure that does not exist today in Brazil, but will be created based on the new model for railways proposed by the government.

The plan was informed on Tuesday the Minister of Transport, César Borges. Should be detailed in the coming days to President Dilma Rousseff, who was already informed of the general studies. "The companies are committed to being leaders in the process," said licensed Maggi (PR-MT) Senator.

With the plan of the new company, the group presented a proposal for change Borges lines that will be offered as a federal grant in Mato Grosso. The project, called Pirarara, plans to invest  R$ 10 billion to R$ 15 billion.Pirarara is a fish that can reach 60 kilos and 1.5 meters, found in Rios Amazonas, Tocantins and Araguaia.

Currently, the federal program provides for only one extension in the state, a stretch of Railroad Integration of the Midwest (I am), 883 km, out of Lucas do Rio Verde and following eastward until Campinorte (GO) where it will interconnect with the North-South Railway. From there, follow the load to the sea through the port of Itaqui (MA).

After studying 40,000 routes flow of grain in the country, the group concluded that the ideal would be to shorten the line at 500 km. She would start further east in Agua Boa and end in Campinorte. This small extension is being called "Fico East".

Moreover, two railways would be created. The main fare from central Mato Grosso, Sinop, and follow by 1000 km to the port of Miritituba in Rio Tapajós, Pará.
There, follow the load for over 1000km of waterway to be exported through the ports to the north, as Vila do Conde and Santarém.

This line, dubbed the Grain Train or Ferrogrão, would the output channel to half the production of soybeans, corn and meal from Mato Grosso, which is expected to reach 50 million tons in 2020. Today, it is 30 million tons. Because of the strategic position Itaituba, which Miritituba is a district already has almost all the big agribusiness.

A third extension would leave the west Sapezal (MT) and follow to Porto Velho (RO), on the shores of Madeira. The path is part of the old studies I am, so it's called "I am the West". From there, the cargo would by river to the Port of Itacoatiara (AM) or to ports of Para

Economy. Maggi explained that the group is not against Fico as is proposed by the government. However, studies have indicated that the best solution is different from what has been analyzed and it was almost a consensus among stakeholders. Great entrepreneur of industry and former governor of Mato Grosso, he pleaded surprised with the findings.

"In relation to the situation we have today, the freight would be cheaper by R$ 40 per ton," said the president of EDLP, Guilherme Quintella. It was up to him, who is chairman for Latin America, International Union of Railways, make such studies. Built three branches, 98% of the production of soybeans, corn and meal of the State would go by rail.

The group asked to open Borges Process Expression of Interest (PMIs) suggested for the three lines. That's the way the government is hiring economic studies and engineering projects, after the virtual monopoly of structuring Brazilian Project (EBP) was asked by the Court of Audit
Posted by Kory Melby at 12:58 PM