The American multinational Bunge and Amaggi - André Maggi Group company, the senator and former governor of Mato Grosso, Maggi - just created a joint venture inland waterway transport in the country.
The Navigations Nations Tapajós (Unitapajós) will be responsible for the transport of grain from Mato Grosso the waterway Tapajós-Amazon to Santarém (PA), an alternative lower cost to businesses. With an initial investment of
R$ 300 million, equally divided, the company will build 90 barges and 5 tugboats.
The Unitapajós intends flow approximately 3.7 million tons of grain in three to four years and should start operating already this season of 2013/14.
Source: Economic Value. By Bettina Barros. October 30, 2013.

This is a really neat development.

The barges may beat the train project to functionality. 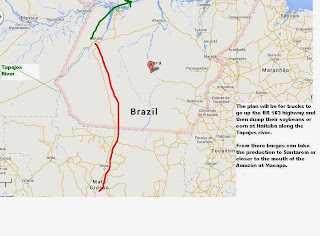 This will help knock a few miles off the truck route to Santarem.

There are hydro-electric dams either planned or being built up stream
from this point.

The irony is that the past few years, Mato Grosso has been surging
at a rate of 4 to 6 million tons of crops per year.

Thus this new idea only deals with 10% of the growing problem.

But this will help take the pressure off of the southern ports
in time.

This is one small step for soybeans-a giant leap for soybean-landia.
Posted by Kory Melby at 4:06 PM